Uber vs. Lyft: A Lesson in Brand Perception

Two companies included for the first time in our US Consumer study last year got the NICE Satmetrix office talking more than usual; Uber and Lyft.

They’re an interesting comparison, because their service offerings have pretty much converged over the last few years. In my experience in San Francisco, it seems like most drivers work for both. The apps are almost identical. The only real difference is the pricing (which is neck-and-neck), and the starkly different branding of the two companies. 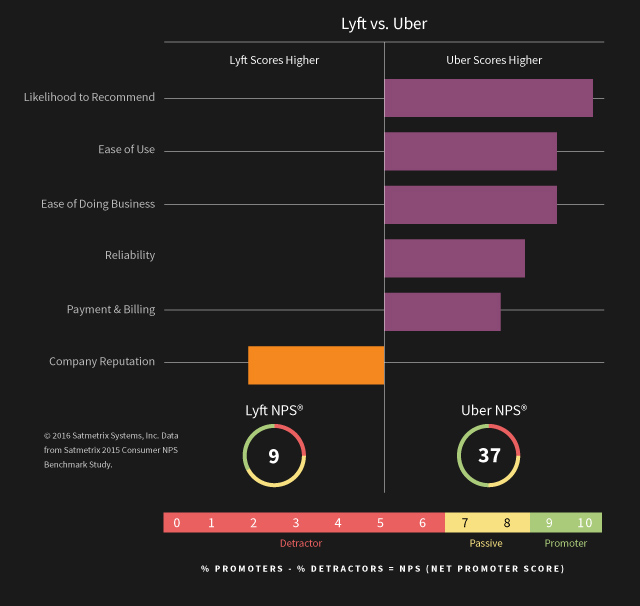 Given their similarities, I was initially very surprised by the difference in Net Promoter Scores. Uber’s score is significantly higher than Lyft’s. They have the second highest NPS in the software/apps sector, just below TurboTax (the perennial winner).

Now, there may be some unfairness in this comparison. For many, “getting an Uber” has become the generic term for summoning a car with an app, and Uber enjoys much higher brand awareness than Lyft. Uber also covers a significantly larger portion of the US — Lyft’s coverage is a subset. So it might be the case that some of the time, Lyft is being rated relative to Uber, whereas Uber is being rated relative to a traditional taxicab, or disgruntled restraint at the bar.

What surprised me was the size of the difference, considering these companies offer almost the same service. In fact, I wouldn’t have been surprised if Lyft had come out with a higher score. After all, it’s Uber’s name that’s frequently in the press for controversy, whether that’s regarding regulators, labor laws, rider safety, or their outspoken CEO.

It does look like these factors have registered in the minds of US consumers — Uber had a much lower company reputation score than Lyft. By some distance it was the lowest in the apps category, and one of the lower scores across all sectors.

But, critically for the two companies, reputation isn’t the strongest driver of NPS — it’s not the most important thing to customers. Perceptions of reliability and ease of use matter more, and these are areas where Uber excels.

While this is likely to be interesting for those that follow the space, there’s a broader lesson for any Net Promoter program. When considering competitive differences, don’t look solely at absolute performance, but consider importance; what matters most to customers.

Telecommunications: 7,263 responses from the US