An NPS Surprise: Something to Love about Taxes

How TurboTax Kept Faith with Customers Despite an Unpopular Change

Tax day – many dread it, few enjoy it, none can avoid it. Many DIYers look to software and technology to simplify the filing process, and therein lies an NPS surprise: TurboTax.

If tax day itself were to get a Net Promoter Score, it would likely dip pretty far into negative territory. But despite its association with an unloved obligation, Intuit’s TurboTax software got the highest NPS of any software or application in the 2015 NICE Satmetrix Consumer NPS Benchmark Study. Leading the pack with an NPS of 52, TurboTax handily outperformed Uber and Microsoft Office, which trail a distant 2nd and 3rd with scores of 37 and 33, respectively. 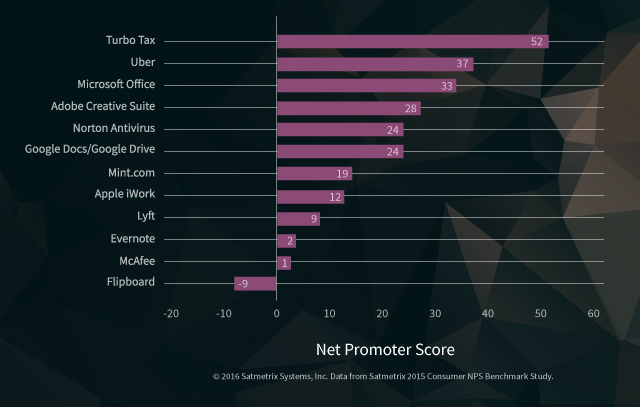 When looking at scores across time, it’s clear that TurboTax is doing something right. Despite minor fluctuations in NPS, TurboTax has held a firm grip on its lead, ranking #1 in its industry vertical for the past three years.

So what keeps those scores high and makes customers loyal to TurboTax year after year? According to our study, TurboTax has especially high satisfaction scores in product/service reliability, ease of use, product features, and completeness of solution. Indeed, even the experts have spoken. “TurboTax Deluxe is our top pick for DIY tax filers thanks to its excellent user experience, voluminous, targeted help resources, and thorough coverage of the tax topics supported,” wrote PCmag.com.

Despite these high scores and editorial endorsements, TurboTax has not been without its challenges. At the start of 2015, TurboTax announced changes to the desktop version of its Deluxe product. Specifically, the company removed several several key functionalities, forcing Deluxe customers to pay an additional 50% for these features that had previously been included. Long-time TurboTax customers took to the web to voice their outrage, leaving thousands of negative reviews at Amazon.com, and even making the switch to Intuit’s top competitor, H&R Block.

Intuit took action. TurboTax issued refunds and restored the once-removed functionalities. Intuit’s attempt to make amends went one step further when CEO Brad Smith issued an apology on social media: “We didn’t communicate enough before implementing the change, and we were slow to react once we began hearing the much-deserved anger and disappointment from some of our customers. Simply stated, we messed up. This isn’t the first time we’ve made a mistake, and I wish I could promise that it will be our last. What I can promise is that we won’t make the same mistake again.”

And it appears as though their strategy has worked. Though unit sales of the TurboTax desktop product have fallen somewhat, the losses have been more than recouped with the growth of its online version. Despite its mistakes, Intuit’s willingness to listen to its customers, make the necessary adjustments, and offer an apology seem to have been enough to mitigate the costs. Indeed, TurboTax users are still loyal – preliminary 2016 benchmark results suggest that TurboTax will retain its leadership position. TurboTax’s head-on approach to customer feedback served them well. How does your company respond to what your customers have to say?

THE DATA BEHIND THE STORY

Use NPS to Drive Business Growth

How to Apply the Discipline Effectively

Learn How to Apply Insights

Profit and Growth with a Customer Focus

Quick Tips from Our Interview with Colin Shaw